The design Travis Bean developed in 1997 was, and is still, brilliant. After years of playing these models, there were a few tweaks that needed to be done to make them the best possible hybrid instruments. After 16 years of research and development, we have made this happen. Bean's most amazing idea has now been realized.

Travis Beans Designs took the long way around in coming to fruition. In 1997, Travis and Rita Bean began forming Travis Bean Designs and planned to produce a reissue of sorts of the original Travis Bean line, these instruments still featured a metal neck and wooden fretboard, but the rear of the body was a hollow pan and was machined from the same billet as the neck. There were around 18 of these prototyped, but before they could start production in earnest their major financing fell through. Travis never stepped back into the guitar-making world.  Unfortunately, Travis Bean passed away in 2011.

Introduced by their mutual friend Hank Donovan after Travis’s passing, Rita Bean and Kevin Burkett of Electrical Guitar Company hatched the idea that the 1997 run should be revisited because it had never really had a chance to shine. Kevin is a huge fan of the prototypes built in 1997, owning 4 at one point.  Using Electrical Guitar Company to manufacture the parts, Kevin built 5 new prototypes to see if it could be done correctly.  Tweaking the design and hybridizing different elements of all the past Beans, the idea looked promising.  Prototypes were sent to Rita to be reviewed by Travis’s best friend Marc McElwee.  He had been friend and business partner in the original 1970s Travis Bean Guitars.  Marc signed off on them and has been very enthusiastic to see these instruments get their chance to shine.  Kevin and Rita have started the joint venture of Travis Bean Designs so that Travis’s final design can be given the shot it never had. 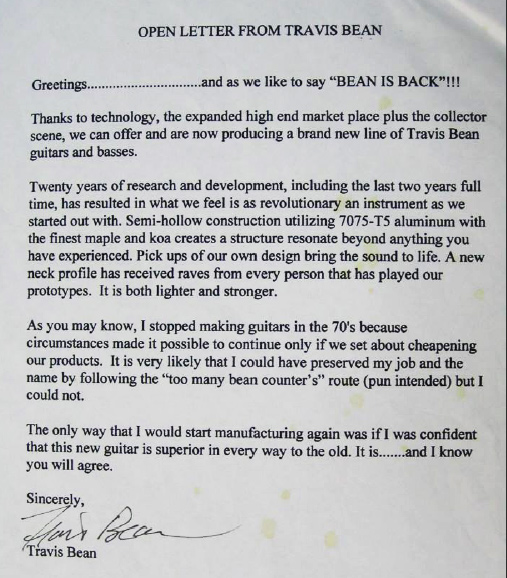